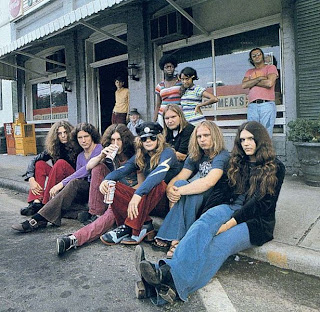 (EDITOR’S NOTE: On Oct. 15, Times-Union Reporter Roy Simpson taped an interview with two members of the Lynyrd Skynyrd Band – Allen Collins, guitarist, and Steve Gaines, guitarist and vocalist – at Collins’ Jacksonville home, little thinking that it would be perhaps the last interview for Gaines, who died in the crash of the group’s chartered plane Thursday as did Cassie Gaines, his sister and a backup vocalist for the group.

Collins was seriously hurt in the crash, but is listed in stable condition in a Mississippi hospital.

Gaines was the newest member of the band, having joined in mid-1976, and had participated in only two albums; a live album which used most old tunes by the group and the newest album, “Street Survivors” in which he played a prominent part both as a musician and vocalist and as a songwriter. He had moved to Jacksonville within the past month to be closer to the band. The following is a partial transcript of the interview.)

T-U to Steve Gaines: How long have you been playing Steve?

T-U: That’s a pretty good while. You’re from Seneca, Missouri? Is that it?

Steve: No, I’m from Oklahoma.

T-U: Was that wrong on the releases?

Steve: No.. you see, when I joined the band I lived on this farm that was right on the Oklahoma/Missouri border. It was in northeast Oklahoma, actually, but I had a Missouri address. It was really strange living on the border. I had to pay long distance to call Oklahoma. It was just weird…

T-U: You’re from Oklahoma then? You lived on a farm there you said?

Steve: Yeah, well I didn’t actually farm. I rented the house and this guy had eight acres and some cattle on it. It was real nice, you know. It’s really pretty up there. We played in Springfield, Missouri, not too long ago and we had everybody down to see the Spring River. We put in canoes and floated down and we had a big cookout. Played baseball. You know – had our day off. It was great. We flew our chartered plane into the Mudville airport – I call it Mudville. It’s Miami, you know, I call it Mudville.

T-U: Miami, Oklahoma. Is that where it is?

T-U: How did it come about that you got into the group. How were the introductions made?

Steve: Well, I was living there in West Seneca, Oklahoma, you know. And the band I was playing with, we were just playing bar gigs and that particular week that Lynyrd Skynyrd was playing in Kansas City, Missouri, we weren’t playing – so I went. If we had been playing, I wouldn’t have been there. Luckily, it worked out that way and I went up there and Cass (Gaines’ sister) was there and I got in to go to the soundcheck and I listened to the soundcheck and everything…So this was the first time I’d met everybody. Cassie arranged with Ronnie and everybody…and they asked me if I wanted to jam with them. So I said o.k.

T-U: You mean onstage with them or offstage?

Steve: …Just jumped up on stage…

T-U: You mean it was actually during the performance?

Steve: Yeah, during “T For Texas.” Man, I was thrilled to death cause we had a lot of friends there who had come to see Cassie, so I jumped up on the stage. It was just…well, hell. I just loved it!

T-U: So when did it actually come about that you were asked to join?

Steve: Well, about two weeks after that. (After I played with them) I just shook everybody’s hand and left the stage. I didn’t see anybody after the gig or anything. Then Ronnie, (Ronnie Van Zant, the group’s lead vocalist), called me up two weeks later and wanted to know if I’d come to Myrtle Beach. We were playing at that time – the band I was playing with, which was my band – and I said, well boys, I got to go check this gig out. I was really digging it (the old band) but we just weren’t doing anything and it was just a pain in the (posterior) and nothing was going on…things were always “maybe”.

T-U: It gets frustrating doesn’t it?

Steve: Yeah. It was real frustrating. I was getting really down. I was thinking about going on the Holiday Inn circuit. I’d never done that, you know. I always played…I mean, to me that’s the same thing as going to a factory…

T-U: Were there any problems in transition for you. You know, playing bar gigs to all of a sudden doing tours with one nighters and being on the road and the whole bit. Or were you travelling quite a bit with your group, just on a smaller scale?

Steve: …I was doing everything in the old group. I was singing. I was writing all the songs. I was playing guitar. I was booking the band; managing us. You know it was crazy. I couldn’t get anybody to do it for me…Now, I just jumped into this (Lynyrd Skynyrd) and all I have to do is play my guitar. They tell me where to go, there’s my room, here’s your key and that’s it. It’s so easy, you know. Takes some adjustments to get used to that.

T-U: You live down here now. I understand you just bought a house?

T-U: You think you’re going to like living in Jacksonville?

Steve: I love it here, man. You know, I couldn’t have asked for anything better if I just sat – before I met these guys or anything – if I just sat and tried to think of what I always wanted to do. Man, it would be to make a record and get it out…and there it is…and I’m living in town and Florida’s the greatest place in the country to live.

T-U: (to Allen Collins) Allen, as a guitarist Steve seems to be taking a prominent role, at least listening to the cassette of the new album…how do you think he fits in with the band?

T-U: What do you think Steve? You’ve got a family, a wife and a child right? How do you see this? As a career? What does a band get, usually, off an album that ships gold?

Steve: This is like a start of what I want to do. This is the beginning. I hope that I can be good enough to keep on going, whether this band goes or not. I hope to be playing for the rest of my life in some way…this is so great because it gives me the independence to think about stuff like that. Before it was just week to week: “Hey, can we play here? How about 75 per cent, huh?” It was crazy, I hated it, you know? I’m glad to be out of that now. I can just…My head’s cleared out and I can just think about music more…This is all I ever dreamed about now, you know? Just doing this. 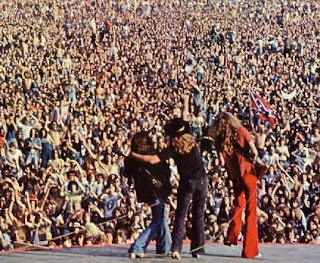